Your wishlist is empty
0
£0.00
There are no products in your cart.
Due to the ongoing COVID-19 pandemic, there may be some delay on despatch of this product. If you have any concerns about this, do contact us prior to your order.


Game On may be used to play games either on a standard PC or on an Xbox via an Xbox Adaptive Controller. The user’s AAC device, such as Smartbox Gridpad, Tobii Dynavox I-series, PRC Accent or a standard computer*, displays a special gaming page set with a similar layout to a standard game controller handset.


Simply gaze at any of the grid cells (or scan and select them using your switches/ joystick) and the corresponding game controller action is sent to the game console/ gaming computer to successfully play the game. Every one of the controls on a standard game controller is reproduced in the page set, including both momentary and timed thumbstick movements and single, double, and timed presses of all buttons, bumpers and triggers. A Rapid-Fire option is also included for all buttons and triggers.


To get started, all you need is an existing AAC device, or a PC equipped with IR output* running AAC software such as Grid 3, Communicator 5 or NuVoice, together with your Xbox/Xbox Adaptive Controller combination and a Game On unit. See Figure 1 for a typical configuration. 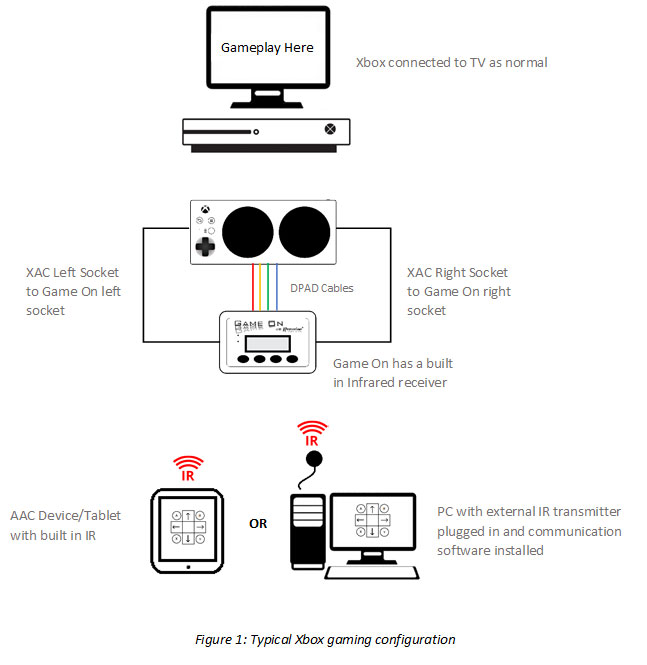 Alternatively, you may use Game On with a gaming PC equipped with IR output*. See Figure 2 for a typical PC based configuration. Although you don’t necessarily need to use an Xbox Adaptive Controller in this case, there are circumstances where this may be beneficial- see Figure 3. 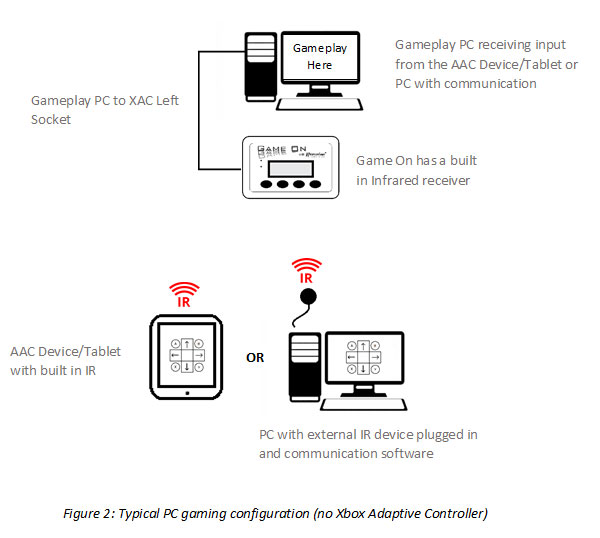 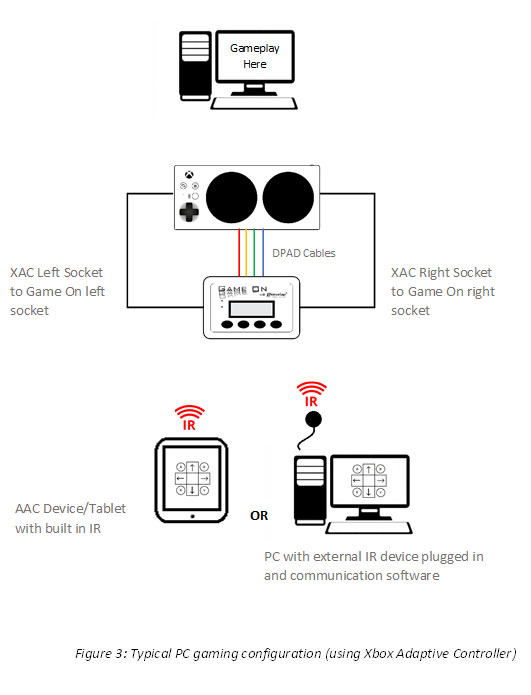 Page sets may be easily customised for particular users and/or particular games, a feature which is especially useful when the user has low cognition and would be unable to understand a full game controller layout. Editing the page set is particularly beneficial when using Game On with Xbox Co-Pilot. And of course, you can still use one or more switches alongside Game On by plugging them into the sockets on the rear of Xbox Adaptive Controller.


Smartbox and Tobii Dynavox offer a page set download library which also allows user generated page sets to be shared for the benefit of everybody in the disabled gaming community. An example page set for all three platforms is provided in the Downloads section below.


Up to six gaming Profiles may be stored and recalled on Game On, either using the keypad or directly on the AAC device using eye-gaze. Profiles are useful both for customising the gaming experience for individual games or for individual users, depending on their preferences and particular needs.


Game On also allows up to four players to be in the same room, a facility which can equally enable co-operative gaming, where each player takes control of a subset of the controls, or to allow gaming tournaments where multiple gamers are playing individually in the same setting. Each player will need his or her own Game On device.

Game On for Grid 3

Game On for Grid 3 and EyeR

Contains a suite of 5 files

Contains a suite of 5 files

Adding Game On page sets to NuVoice on Accent

How to create & edit your own Smartbox Game On 1 gridsets


Pretorian Technologies is grateful for the support of Tom Wagner, Smartbox Assistive Technology, Everyone Can and SpecialEffect in the creation of Game On 1. Please note that Game On 1 is intended only to help gamers who have a genuine need for assistive technology. Please respect the efforts of all participants in this project by using it only for that purpose.

*PC running Grid 3 must have an infra-red output, for example by connecting a Tobii EyeR or Abilia Progress Star USB.

Xbox, a trademark of Microsoft Corporation, is included for illustrative purposes and is acknowledged.

Grid 3, a trademark of Smartbox Assistive Technology, is included for illustrative purposes and is acknowledged.